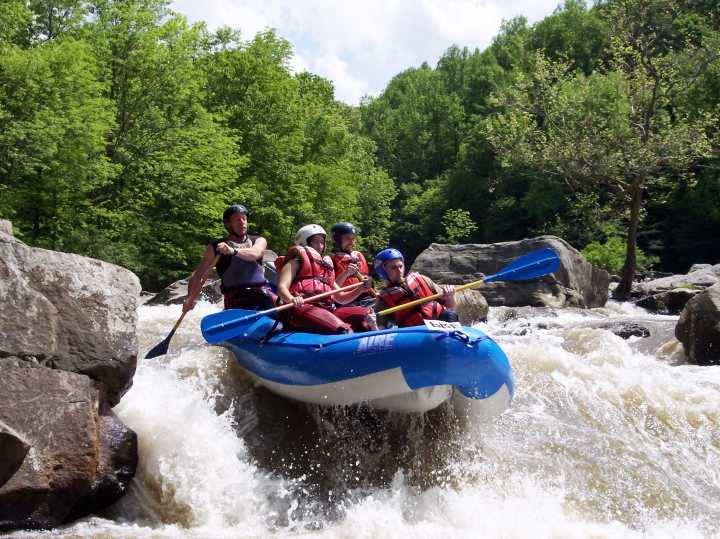 The Upper Yough (pronounced YOCK, like rock with a Y) flows through one of the last remaining wilderness canyons in the eastern US. World renowned for continuous whitewater and an impressive average vertical drop of over 115 ft per mile for 5 miles. This creates a river rafting adventure with non stop intensity, exhilarating thrills, and adrenaline pumping action! Famous for its tight and technical passages, continuous rapids, the Upper Yough is an impressive section of river to raft. "The miracle mile" of the Upper Yough river is a mile long section with a vertical drop of over 120 feet per mile. This section of river was considered unraftable in the early stages of exploration.

In the mid 1960's some brave open canoeist started boating the river with mixed results which helped name the rapids. In the early 1970's the river was kayaked with better success, but still no one wanted to raft this section. In the early 1980's, Phil Coleman and Roger Zbel begin to seriously look at commercially rafting the Upper, with the thought of starting a whitewater outfitting business. In August 1981 Precision Rafting Expeditions was formed, providing whitewater river rafting trips down the Youghiogheny from Friendsville, MD. These early commercial trips were not without adventure and mishap as these pioneers started to get the pattern down, also the rafts in use were not the state of the art self bailing boats of today. Bucket boats added to the excitement by forcing you to stop before all of the big drops to bail your raft. The local residents weren't to thrilled to see commercial activity take place and it was not uncommon to have shuttle vehicles vandalized. Gun shots were another means of discouragement. This is Maryland's only wild and scenic river corridor and is still a very wild and pristine river canyon.

Over the years though commercial river rafting began to catch on and before long mid 1985 the State of Maryland started to regulate outfitters and guides. A lot has changed over the years but whitewater river rafting the Upper Youghiogheny from Friendsville, MD is still a very exciting trip! The river starts as a flat water river for about 1.5 miles and then the warm up mile starts with little rapids that get a little closer together and a little harder as you move through the warm up mile. Then .....the awesome central canyon begins! For nearly 5 miles you take on 20 major rapids, back to back!! Control and technical maneuvers are made easier with the small state of the art self bailing rafts. The crew is one guide for three rafters for maximum action. For ten breathtaking miles your adventure takes you through 20 consecutive major rapids-each one guaranteed to leave a lasting impression. The whitewater dam releases happen every Monday and Friday and the first Saturday of May. The summer Saturday releases start on the next to last Saturday in June and go to the second Saturday in September, with one bonus Saturday the first Saturday in October. Check out the dam release calendar for exact dates and times for a great whitewater river rafting trip in Friendsville down the beautiful Youghiogheny River.